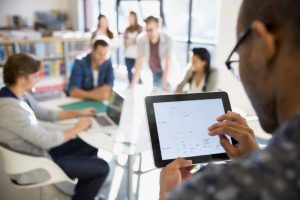 In the modern world, it is hard to turn your head without laying eyes on another screen. This is having a major effect on eye health, with the Optometrists Association Australia reporting that vision problems and deterioration of eye health is on the rise as technology continues to evolve.

So what steps should you be taking to minimise eye deterioration, while still keeping touch with the digital world?

The screens we carry in our pockets

The use of smartphones and tablets is exploding in Australia. Tablet ownership almost doubled from 2013 to 2015, while smartphones rose from 11.1 million to 15.3 million in the same period of time.

Despite their diminutive size, these little screens can actually cause significant stress to your sight.  Research has revealed that one in four people suffer from eye strain due trying to read small text on digital devices. As a result, our rate of blinking drops to half the original rate, and eyes become fatigued from the concentration required to focus.

Ceasing to use these devices is impractical (borderline impossible in the modern world), but there is a simple trick you can adopt to minimise the strain on your eyes: every 20 minutes, stare at something 20 metres away for 20 seconds. This 20-20-20 technique will relax your eyes and prevent strain and fatigue.

Before the age of the modern television, we used to stare at giant a CRT block that spewed all sorts of eye-damaging emissions across the room including ionising radiation, beta rays and UV light.

But just because our LCD and LED televisions don’t quite have the same problem with emissions, doesn’t mean they aren’t bad for your eye health at all.

The same rules for taking a break apply when watching television for an extended period of time: step away during the ad breaks.

But one benefit that televisions do have is that they can provide the warning signs for eye deterioration.

Sitting and watching the screen in a static position can alert you to symptoms like double and blurred vision, which are signs of refractive errors. Also look out for colour changes—which can be an early indicator of degeneration of the eyes.

What about the screens you can’t avoid?

Even workshops where you thought computers would never exist are digitally connected these days.

The Optometrists Association Australia (OAA) has reported that workers are putting in longer hours and are relying on computers more and more to do their job.

This is leading to vision problems and deterioration of eye health, with office workers the ones most under the gun.

The OAA reports that 35 to 48 per cent of white-collar workers suffer from computer eye fatigue, which highlights the need for eye care while using this kind of technology.

Some workplaces advise that you should take a break every hour, but really you should be looking away from the screen every few minutes, if possible.

Making sure your eyes are level with the top of the monitor and ensuring there is no reflection or glare on the monitor can also limit the likelihood of eye strain.

If you would like more information, NewVision Clinics has experienced professionals on hand to guide you through proper eye care and answer any questions you may have.

Before we start thinking about surgery, we need to know every detail of your eyes and vision. To that end, our highly trained optometrists and orthoptists give each patient a thorough eye exam and comprehensive consultation. They check the quality of your vision and for general ocular health using an array of tools and measurement techniques. Each member of our experienced team is registered and trained in accordance with professional guidelines. They’re assessed regularly to ensure they deliver the highest quality of care, continually improve their knowledge of developments in the field and are kept up to date with industry regulations.

Get Social With Us